We are committed to the responsibility of delivering timely and valuable education and aid to the people of Venezuela.

Your contributions are tax deductible! 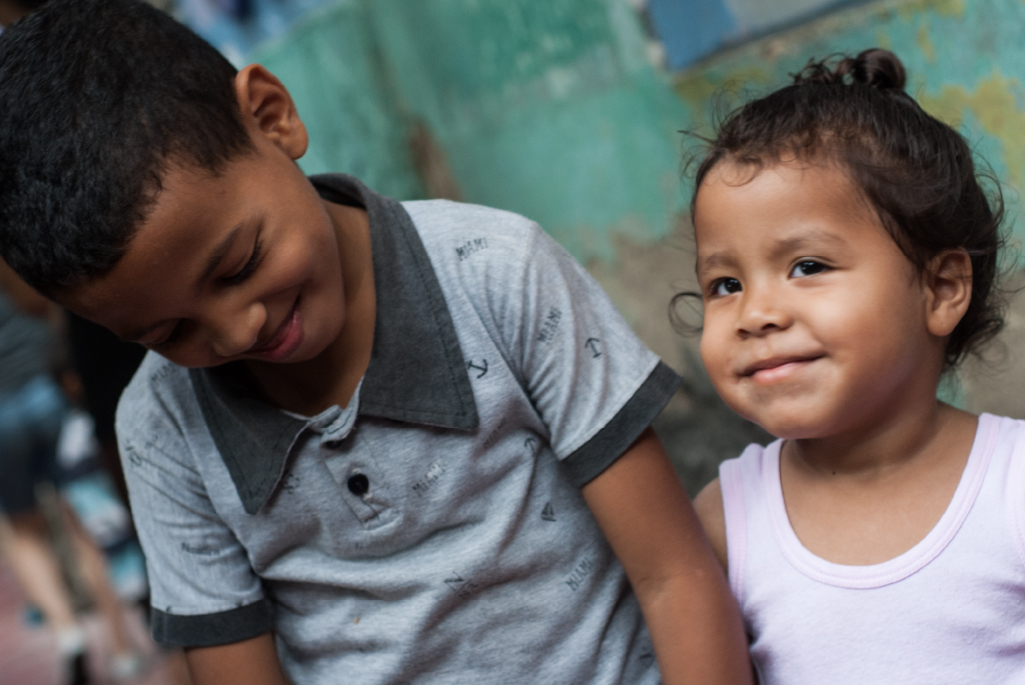 We are transparent and accountable in our operations and our fundraising efforts. We provide detailed reports of our activities and achievements. 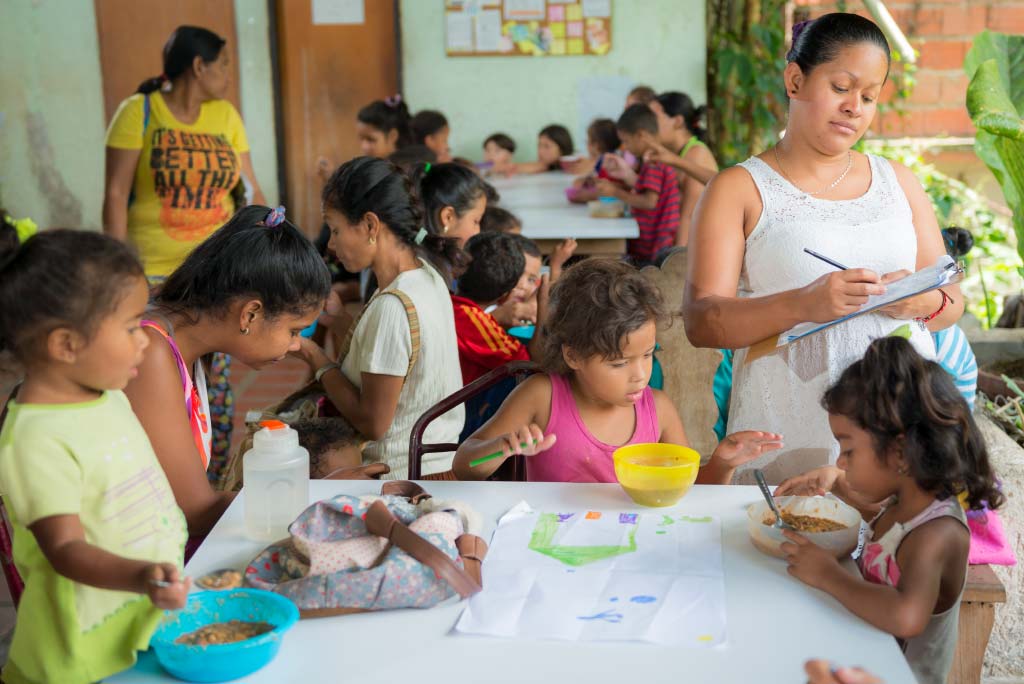 To be an organization recognized for its values of commitment and solidarity with the men, women, and children of Venezuela. 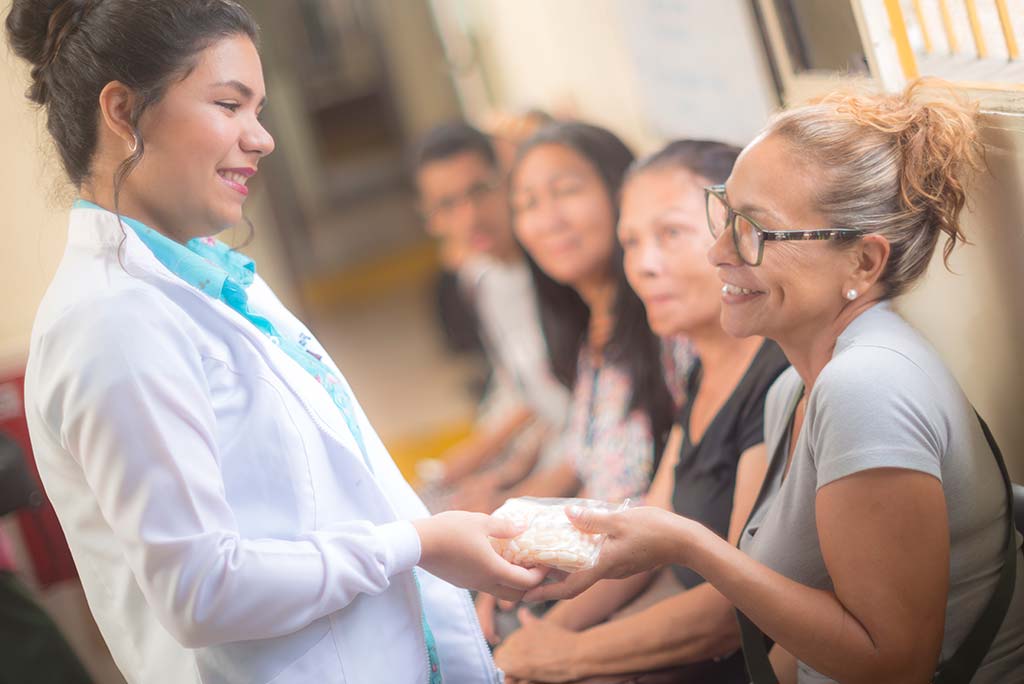 To provide the tools, education, and empowerment, to overcome the deep crisis in Venezuela with dignity and hope.

This initiative was born in October of 2016 from the effort of four Venezuelan women living in the United States, compelled to act on behalf of their country.

The Foundation was formally founded by Gloria Mattiuzzi, Gabriela Rondón, Maria Elena Teixeira, and Carolina Febres, on December 14th of 2016 and it is dedicated to creating programs and partnerships to deliver hope to any corner of the national territory of Venezuela. 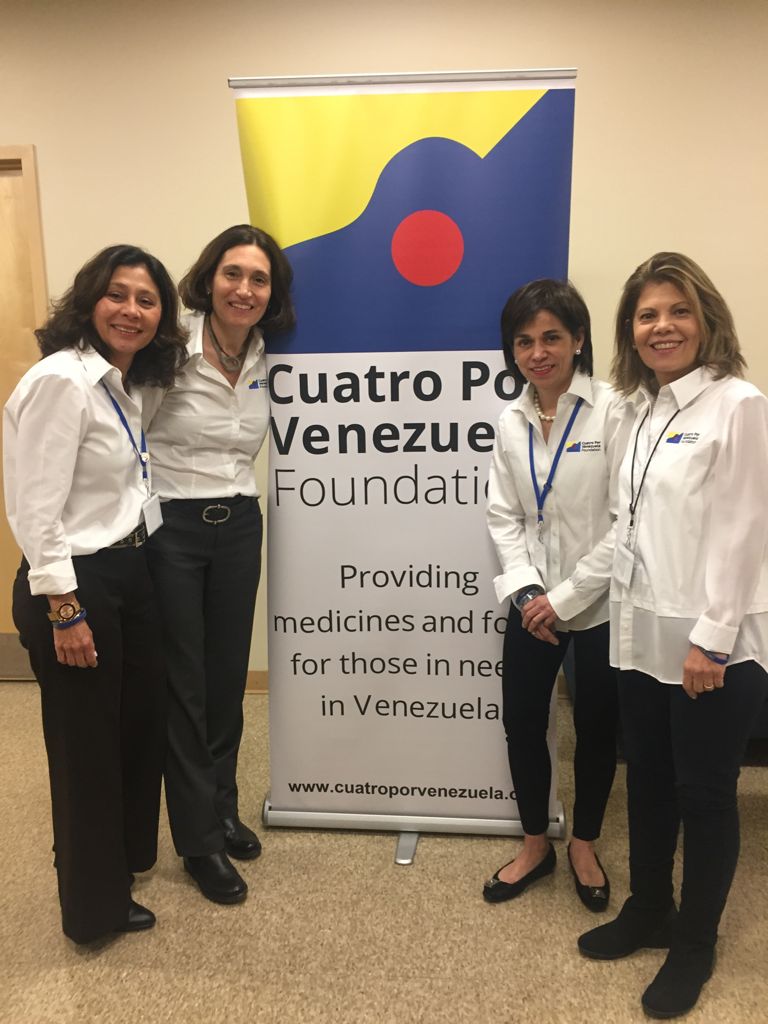 TOGETHER WE DO MORE

Following the initiative of Cuatro Por Venezuela Foundation,
we honor the group of professionals who make our work possible every day.

Cuatro por Venezuela Board of Directors members do not receive any financial compensation.  Each member generously donates time, talent, and treasure and passion towards the accomplishment of the Foundation’s mission and vision.

Click on the name of each member to find a short bio.

Gloria Mattiuzzi was born in Caracas, Venezuela. She completed her medical school at the Universidad Central de Venezuela, Escuela Luis Razetti. In 1991, after finishing her Internal Medicine training at Hospital Dr. Domingo Luciani, she came to Houston, TX to pursue a fellowship in Infectious complications in cancer patients at The University of Texas M.D. Anderson Cancer Center. Dr. Mattiuzzi was an Assistant Professor at the Department of Leukemia at MD Anderson Cancer Center for more than 12 years. In 2016, she decided to found Cuatro Por Venezuela in order to have a formal way to help Venezuelans with the shortage of medicines and food. Dr. Mattiuzzi is married and has 2 sons. Her hobbies are running and cooking.

Dr. Rondón is Associate Professor at the Department of Stem Cell Transplantation and Cellular Therapy at the University of Texas MD Anderson Cancer Center; where she works since 1995. As Director of Protocol Research and Data Management, she has directed research operations and pioneered data collection programs recognized throughout the field. Dr. Rondón also has been Vice Chair of the MD Anderson Cancer Center Institutional Review Board for the past 14 years. She graduated with her MD from the Universidad Central de Venezuela with post-doctoral training from the University of Cincinnati and the University of Texas. In 2016 she joined Cuatro Por Venezuela as co-founder. She is married and has three children.

Board Member | President of the Board

Lesly Simon is a Venezuelan Publicist and Social Entrepreneur, trained in management at IESA and in Negotiation and Conflict Resolution at Harvard. Simon holds 20 years of professional experience in strategic positions at Santa Bárbara Airlines, from VP of Corporate Affairs, to US Country Manager and President in Charge. She has been VP of Alas Solidarias Foundation and Co-Founder of the "Entre Panas" (Between Buddies) social program. Simon is also Co-Founder of Engranart. She was President of the Venezuelan American Chamber of Commerce year for the period 2011-2013. She is the Active Director of Special Olympics Venezuela, International Friends of the Child Foundation with Cancer, Social Impact Committee of the Venezuelan American Chamber, Venezuelan American Friendship Group based in NY, and a VAMA Volunteer (Venezuelan American Medical Association). In 2013, she received recognition of the United States Congress for her support for the development of the South Florida Hispanic community. In December 2018, she received the Medal of Honor of the Southern Command for her work as a volunteer in the Mission "Enduring Promise" in the Comfort Hospital Ship of the United States Navy in Riohacha, Colombia. Lesly Simon actually resides in Miami.

Board Member, Marketing and Outreach Advisor

Mafe Izaguirre is an artist, graphic designer and Venezuelan educator based in New York. Izaguirre brings together over twenty years of experience in the development of brand platforms and digital media projects. She leads the strategic consulting firm, Simple 7, a creative laboratory specializing in design as a tool for social change. She is currently an artist member of the Long Island City Artist Association (LICA), the Fat Cat Fab Lab maker space, a Tech Mentor at Mouse Inc, a nonprofit that promotes programs of technology with purpose and design thinking, as well as the first Artist in Residence at the Bronx-based non-profit DreamYard Project. In 2017, in collaboration with members of the IPTAR community, Izaguirre created the psychoanalytic magazine ROOM: A sketchbook for Analytic Action, Website: www.mafeizaguirre.com

Winston Carrillo is a senior executive level manager with over 55 years of
international experience in the oil and gas industry. He worked for PDVSA for 40 years and retired in 2000
as the Executive Production Director after which he
established a consulting practice in the energy sector in Venezuela,
Colombia and USA.

From 2009 to 2011 worked for Brenntag in  Mexico, Guatemala and Colombia.  Mr. Carrillo also consulted for Kizer Energy Amec/FW and PEMEX.

Winston began his professional career with Mobil Oil Corporation in Venezuela in 1961 and continued at Corpoven, S.A. and PDVSA until he retired in 2000.  He spent two years working with British National Oil Corporation.

Mr. Carrillo has been recognized as a distinguished professional and excellent team builder by PDVSA. His contribution to
PDVSA, and the social community was recognized in multiple occasions by the respective authorities.  He lives in Houston, TX.

Eddymar Brito Diaz also known as Nena Brito, is originally from Anaco, Venezuela. She completed a degree in Graphic Design in Puerto La Cruz. At the age of 26, she was diagnosed with thorax cancer while visiting her family that lived at that time in Houston, TX where she had surgery to extract the tumor. Two years later she found out that the tumor had come back more aggressively. She was taken to the MD Anderson where she underwent a 14 hours surgery that saved her life at 28 years old. Nena decided to move to Houston with her family, where she started working as a graphic designer until she decided to open her own company. Currently, she is a successful businesswoman who lives every day of her life to the fullest and her passion is to travel the world and surround herself with good friends and endless happiness.

Dr. Marcel Pontón is an Associate Clinical Professor in the Department of Psychiatry and Biobehavioral Sciences at UCLA. He has led various clinics and services for the County through Harbor UCLA over the past two decades. Currently, he serves at Olive View Medical Center where he trains pre-doctoral and post-doctoral students.  He is the author of several peer-reviewed articles and the co-author of two books in the area of cross-cultural assessment. He is a Fellow of the National Academy of Neuropsychology and the Founding President of the Hispanic Neuropsychological Society. He has been working in the field of head injury assessment and treatment for the past 30 years. He has a private practice in Pasadena (Persona Neurobehavior Group), and he consults with multiple rehabilitation hospitals in the area.

Dr. Sergio Giralt is currently the Deputy Division Head, Division of Hematologic Malignancies; Melvin Berlin Family Chair in Myeloma Research, and Professor of Medicine at Weill Cornell Medical College as well as Chief Attending of the Adult Bone Marrow Transplant Service at Memorial Sloan Kettering Cancer Center. A graduate of the Universidad Central de Venezuela, he did his postgraduate studies at Good Samaritan Hospital and later his fellowship at the University of Texas MD Anderson Cancer Center. A renowned investigator in the field of blood and marrow transplant his clinical research efforts in developing safer and more effective ways of conducting stem cell transplantation in patients with myeloid leukemias or myeloma. Dr. Giralt has occupied many of the most important leadership positions in his field including President of the American Society of Blood and Marrow Transplant from 2014 to 2015.

Dr. Alvarez is a Clinical Oncologist in Houston, Texas. Originally from Luis Beltran (Rio Negro), Argentina, he completed his Medical education in La Universidad de La Plata. He came to the USA in 1994 and completed his training in Internal Medicine at The University of Texas (Houston) and his fellowship in Medical Oncology at the University of Texas MD Anderson Cancer Center (Houston). He is world-known, recognized for his contributions to the multidisciplinary management of breast cancer, particularly inflammatory breast cancer. At Cancer Treatment Centers of America® (CTCA), Dr. Alvarez was the Medical Director of the Breast Cancer Center in Atlanta and Medical Director of Cancer Research. Dr. Alvarez is currently working in private practice in Houston, Texas. Dr. Alvarez’s hobby is ice climbing and winemaking. He is married and has 2 sons.

Elena is the product marketing manager for the Electric Coin Company, where she focuses on Zcash and privacy-preserving technology. Elena has an MBA from New York University Stern School of Business and runs Blockchain Latinx, a monthly meetup group in New York City. She has been volunteering with Cuatro Por Venezuela since 2016 and is very proud to be part of the team.

Click on the name of each member to find a short bio.

Sally was born and raised in Caracas where she graduated with a B.A. in Advertising and PR from UCAB.  She moved to Houston in 1992 to pursue a M.A. in Mass Communications at the University of Houston.  She holds certifications in business and marketing and a non-profit fundraiser certification from Rice University.  She's held professional positions at advertising agencies and has had an extensive career in marketing at United Airlines, Phillips 66, ExxonMobil and Mattress Firm.

Sally is passionate about serving and making a positive difference in others' lives.  Sally served Latin Women's Initiative as a Board Member, Community Involvement Chair and Advisory Board Member for over six years.  As Hispanic Network lead at Phillips 66, Sally was a promoter of diversity, inclusion and culture.

She lives in Houston, Texas.

Marisabel is a professional experienced in oil markets, planning, operations trading as well as non-profit project management and fundraising.  She has a Chemical Engineering degree from the University of Oklahoma.  Besides her busy job in the oil industry, she has invested part of her time into organizing the Houston-Venezuelan community to make it stronger as an educated ethnic group, leading programs to pay forward.  She has been an avid resource in Venezuela's fight for democracy and in projects that support unassisted communities.  Marisabel resides in Houston, Texas.

Marcia is a business sustainability and ESG specialist, focused on finding creative solutions for one of the most pressing issues of our time: climate change. Convinced in the power of companies of any size to promote positive and lasting change.  Her goal is to promote long-term growth and development by working on comprehensive strategies that improve people's lives.  Marcia is interested in sustainable development of society and businesses, innovation, food production, and ESG.  Marcia graduated from Oklahoma State in 2018 with a M.A. in Mass Communication and later obtained a master's in Sustainable Business from the University of Miami in 2020.

Marcia lives in Miami, FL and serves as Communications Manager for Cuatro Por Venezuela since 2018.

Making a Real Difference in Others' Lives

Cuatro por Venezuela is proud to thank and recognize the extraordinary individuals and organizations that are making a real difference in the lives of families and individuals.

They are committed partners in creating a better Venezuela. 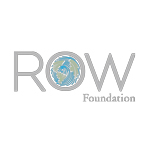 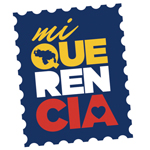 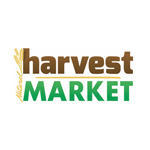 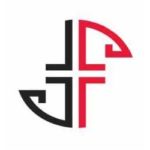 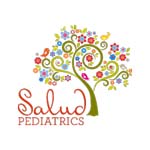 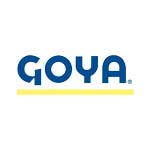 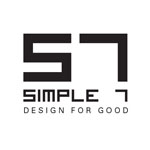 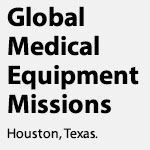 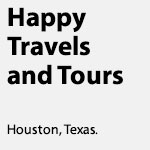 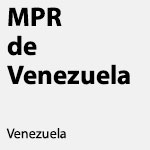 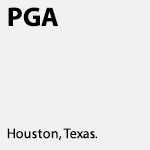 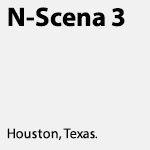 In order to submit a project for consideration, it must abide by the mission, vision and guidelines of Cuatro Por Venezuela Foundation.  In addition, a project proposal must be submitted within this format.

to our newsletter to receive the latest updates

We do not spam. We will not share your email with anyone.

Subscribe our newsletter, join us and get the latest updates! 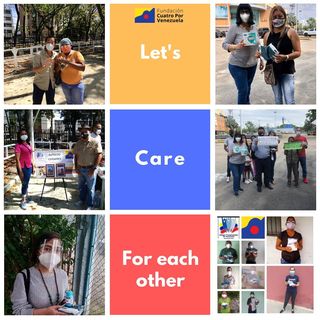 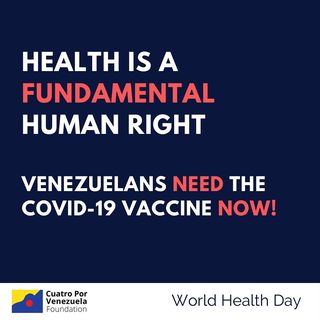 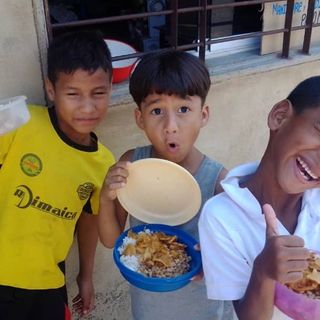 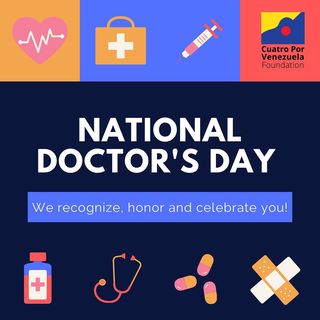